Using this image gallery is very simple, just click on an image to see it full size (you can also read the description much easier). Once you are displaying the ‘full size’ screen you can also scroll through the images with the left and right arrows. When finished click ‘X’ to close the screen. 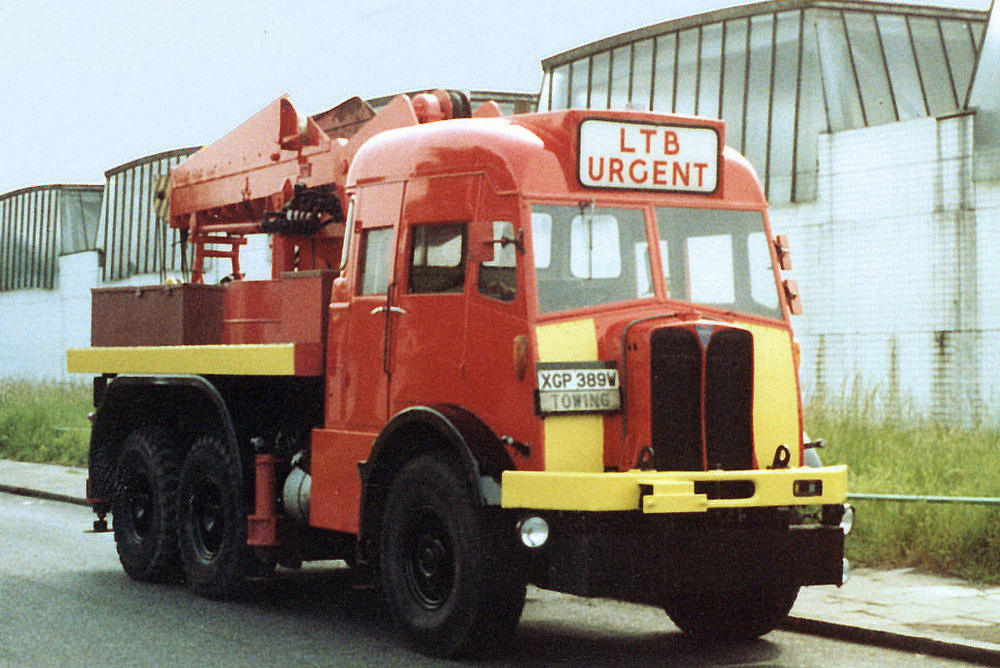 This is a photo of Milly, when she still belonged to London Transport. The Background is thought to be the Bus Garage at Wood Green London. If you recognise it please let us know. Note that by this time Milly had acquired a Number Plate and was registered. Prior to this Milly (like most Recovery Vehicles) operated on Trade Plates. Pictured believed to be from Chris Heaps. 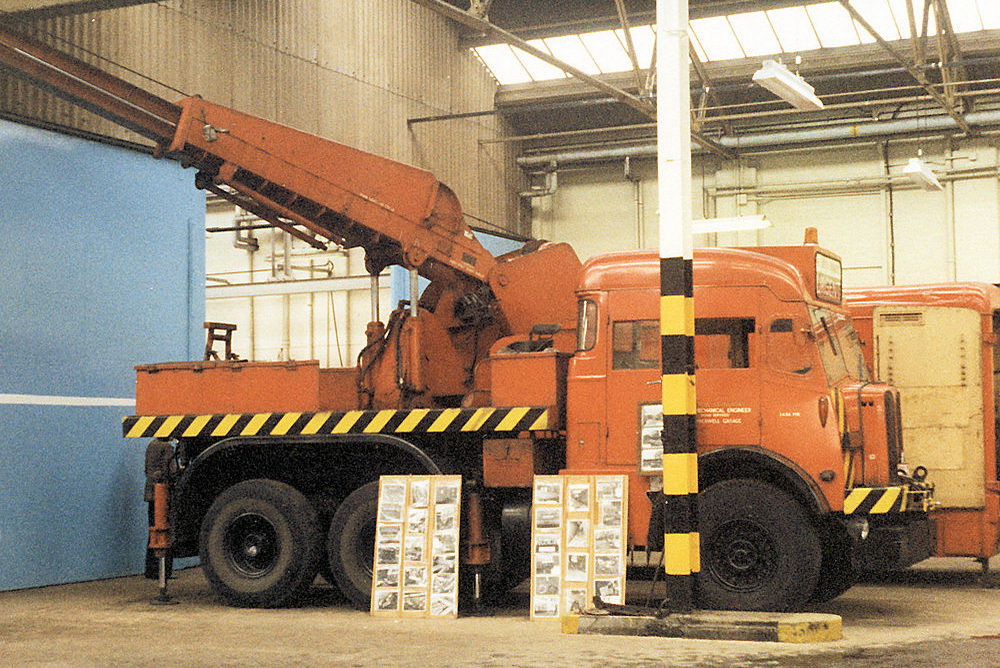 A pictures of Milly taken at an LT open day at Wood Green Bus Garage, on 6-10-1979 and shows Milly with her slewing Jib fully extended. Pictures are from K Walker via Chris Heaps 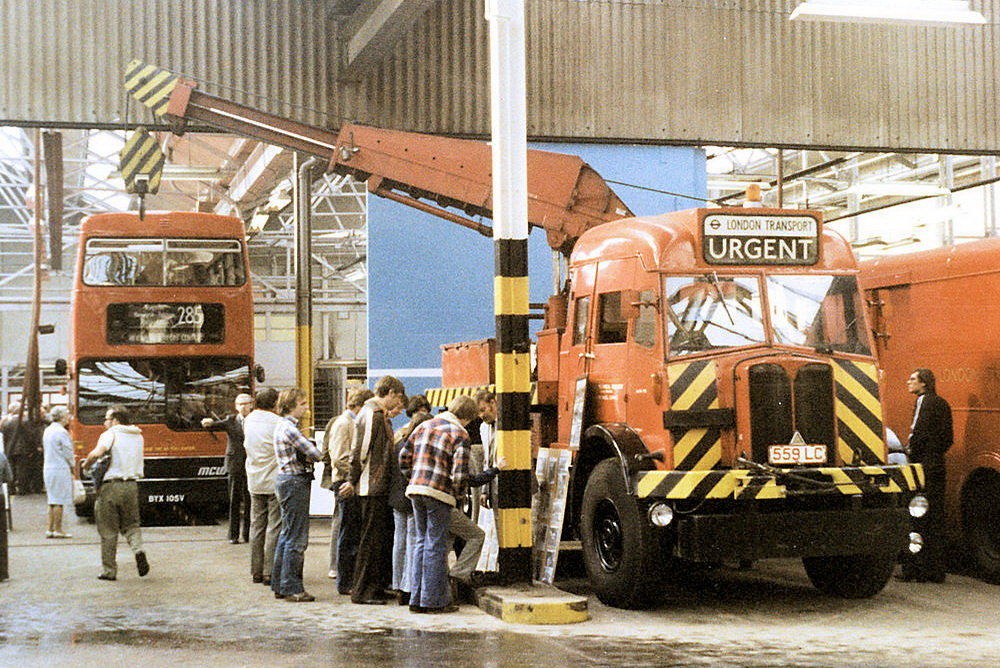 Another pictures at the LT open day at Wood Green Bus Garage, 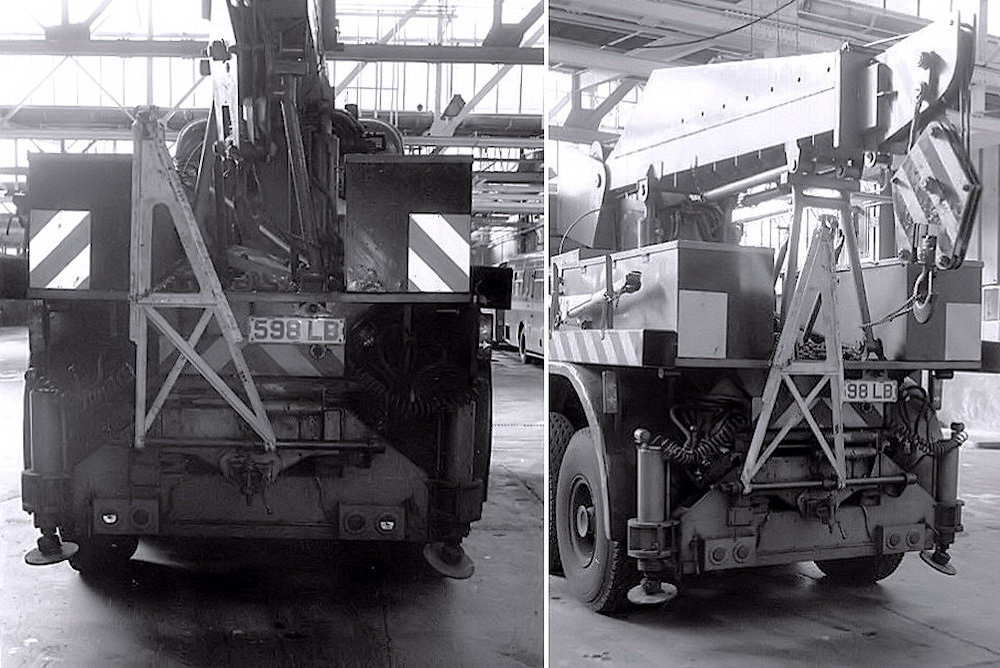 Martin Fisher sent in these picture of Milly taken at Camberwell on 10th February, 1972. when he was London Country's technical assistant. He went to Camberwell to look at recovery vehicles and their equipment and had a guided tour of 1456MR and also of 739J, the STL Auxiliary tender. London Country were specifically looking to purchase a so-called 'Hawkridge beam' that LT used for lift and tow recovery of vehicles with long front overhang, so he had a good opportunity to photograph both vehicles and their equipment. 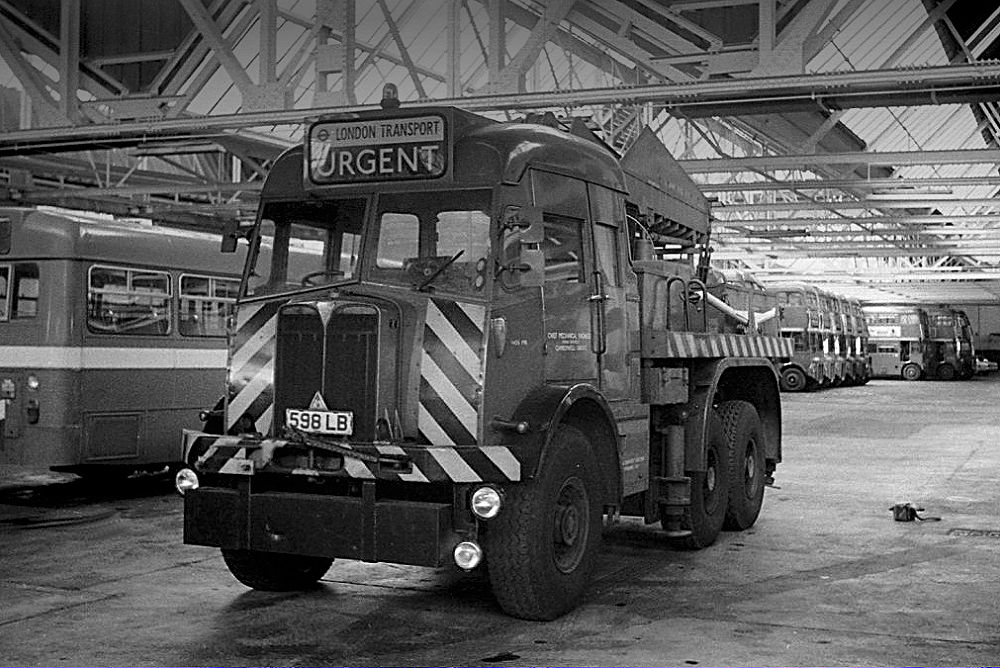 He (Martin Fisher) also writes "My first involvement with 1456MR was as a Development Office trainee, put out to Camberwell to learn about bus garages; there had been public complaints about smoke from the vehicle and I was deputed to ride with the driver, while the Assistant Divisional Engineer followed in his car to watch for smoke. When we reached the hills near Crystal Palace, the cause became all too evident - after reaching the top of each hill, the driver de-clutched and coasted down the other side, then dropped the clutch to slow the vehicle. The rev counter reached over 2500 rpm, I thought the pistons were about to come through the bonnet and clouds of smoke emerged from the exhaust. The driver's 'excuse' was that she was a bit slow and this was the only way of getting any speed out of her!" 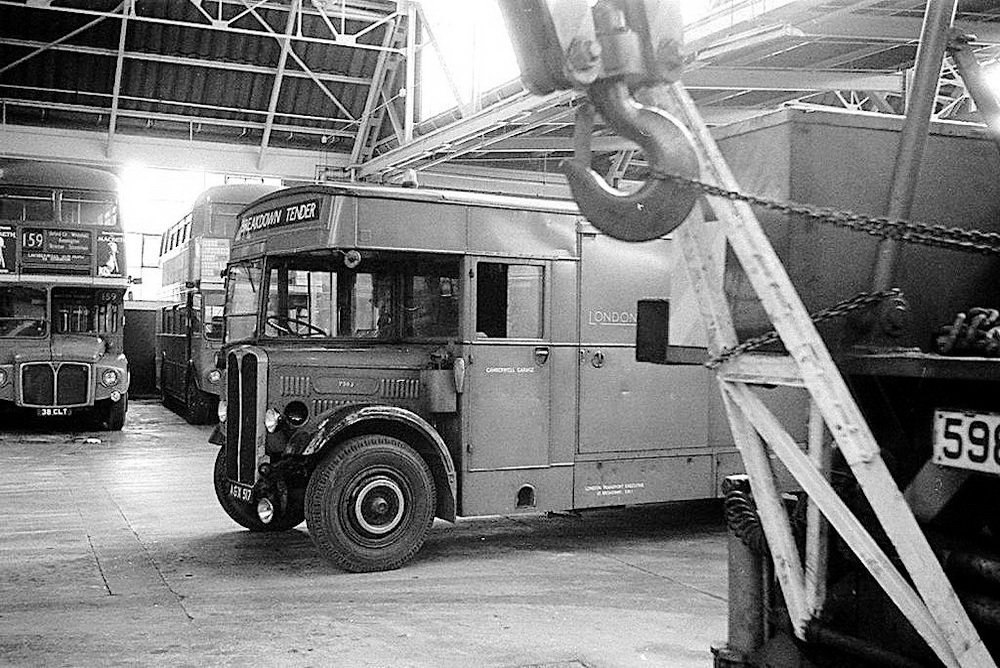 Two very rare photographs again from Martin J Fisher showing the inside and outside of an AEC Regent Auxiliary Tender 739J (originally bus STL175, built 1932/3), partly hiding behind Milly. It was 'normal' practise back then for a tender to attend all incidents along with Milly. Often each vehicle would have a crew of four! 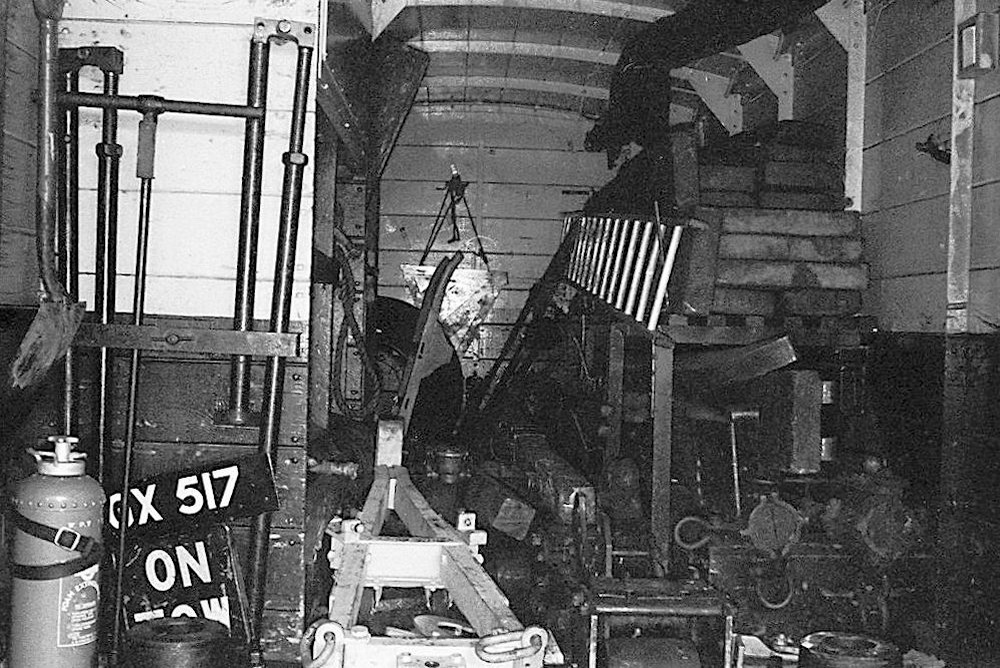 Martin says "The Hawkridge beam is the wishbone shaped device, prominent in the foreground; the U-shaped strap at the narrow end hooked over an axle beam, the intermediate cross-piece approximately lined-up with the front cross-member of the bus and the end nearest the camera had the two suspension links, plus a tow-bar point in the centre. I suspect the 'Hawkridge' name came from the draughtsman who designed the beam, but I can't be certain of that. Straight tow bars and toe jacks can also be identified, along with an amazing collection of blocking timbers. 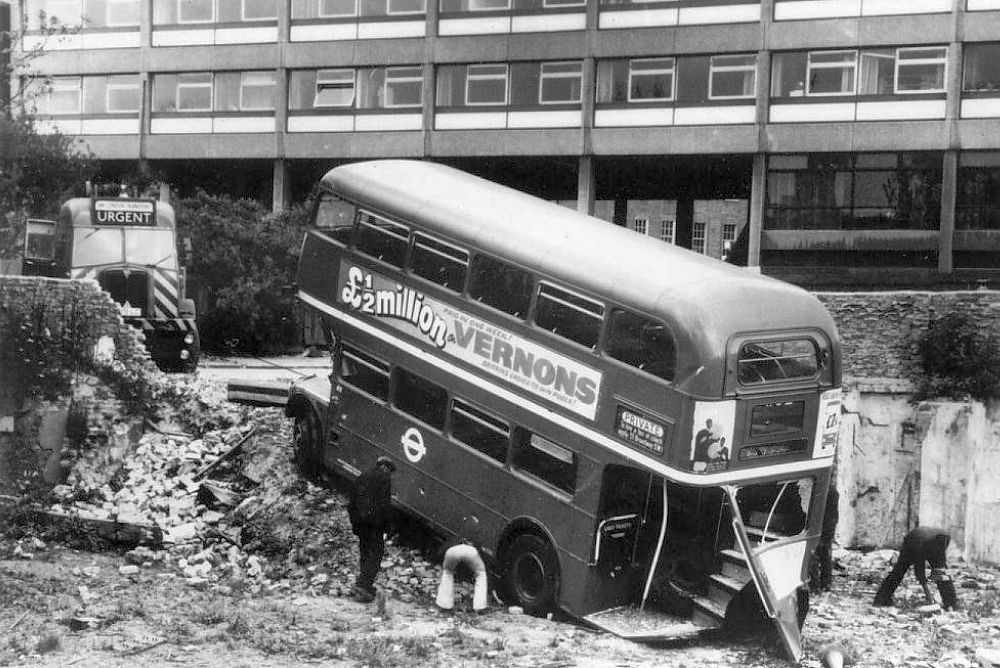 Milly at work. This shows 1456MR recovering RM 1542 which had been stolen from near Tower Bridge where it had been on a staff outing from New Cross Garage, before being stolen by two youths! (Image from Alan Grinter via LTSV collection) 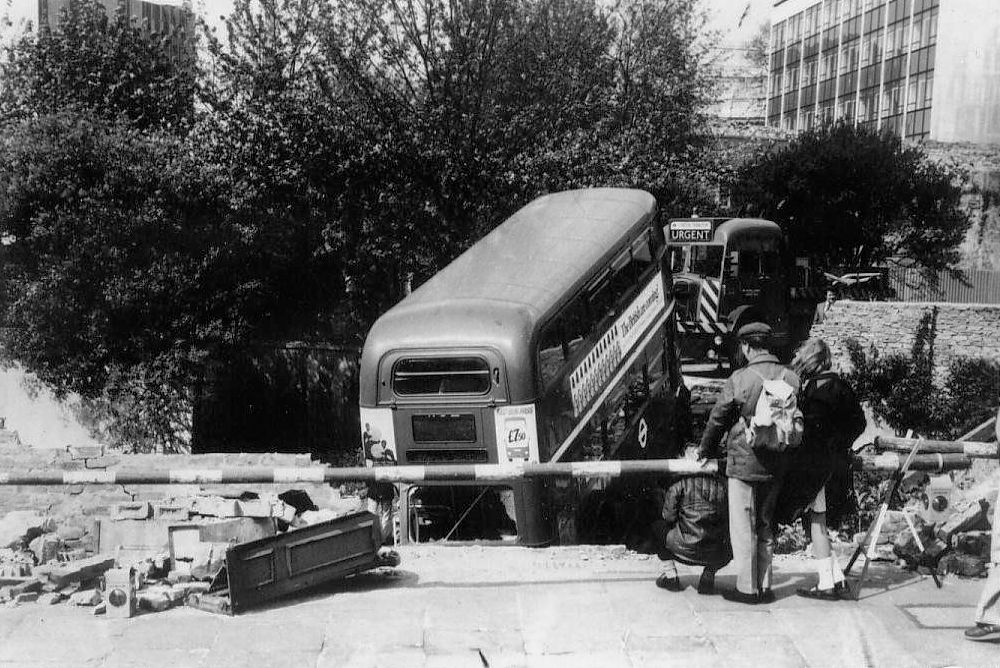 Another view of the same incident. The two joy riders crashed the bus through a wall at Tower Hill and into an excavated building site. The accident is reported (London Transport Scrapbook 1976) as happing on Good Friday 23rd of April 1976 and recovery taken place on the next day. However Good Friday that year was actually a week before. (Image from Alan Grinter via LTSV collection). 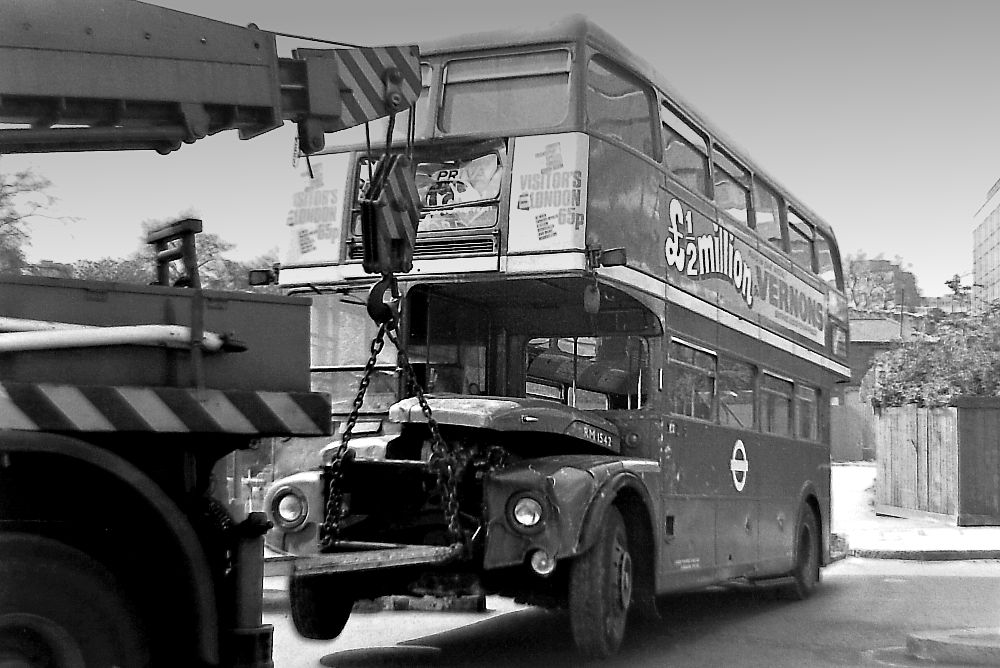 This very telling image shows RM 1542 being recovered after the incident. A close look at the destination board shows damage that is unlikely to have happened during the accident and looks (to the webmaster at least) like someone forgot about Milly’s jib while winching the bus out. This possibility is also mentioned in the London Transport Scrapbook 1976 edition. (Image courtesy of Lloyd Rich collection).

A rear view shot showing the damage to RM 1542 sustained during the incident. (Image courtesy of Lloyd Rich collection).

The duo leaving the scene and not doubt on way to good cup of tea (Image courtesy of Lloyd Rich collection). 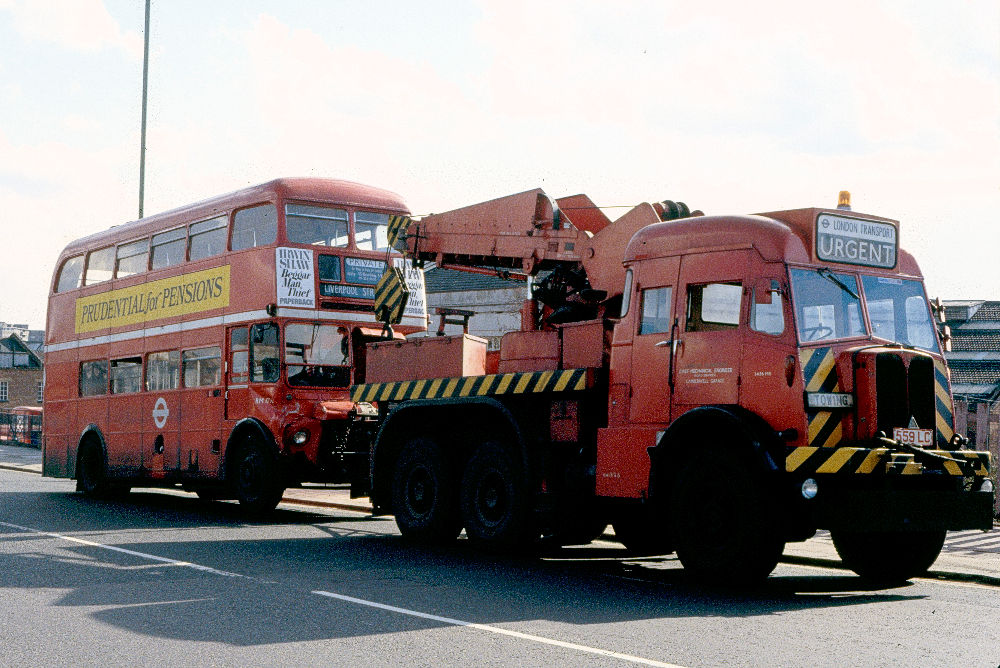 Another photo of Milly working this time recovering a bus near Greenwich (image from Michael Mann). 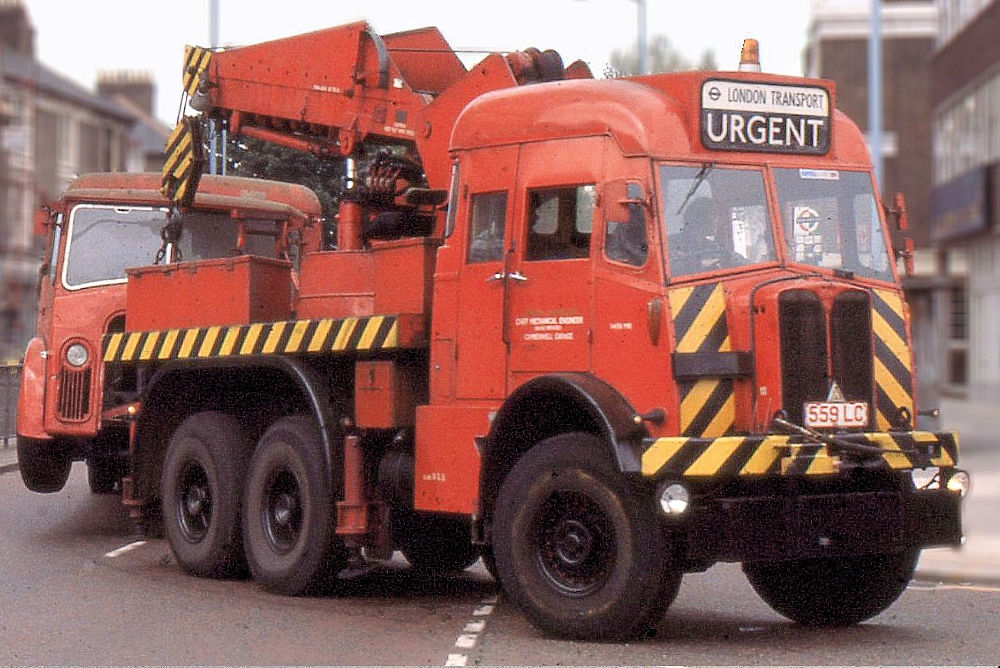 Milly recovering its Breakdown Tender after attending an incident (image from Michael Mann). 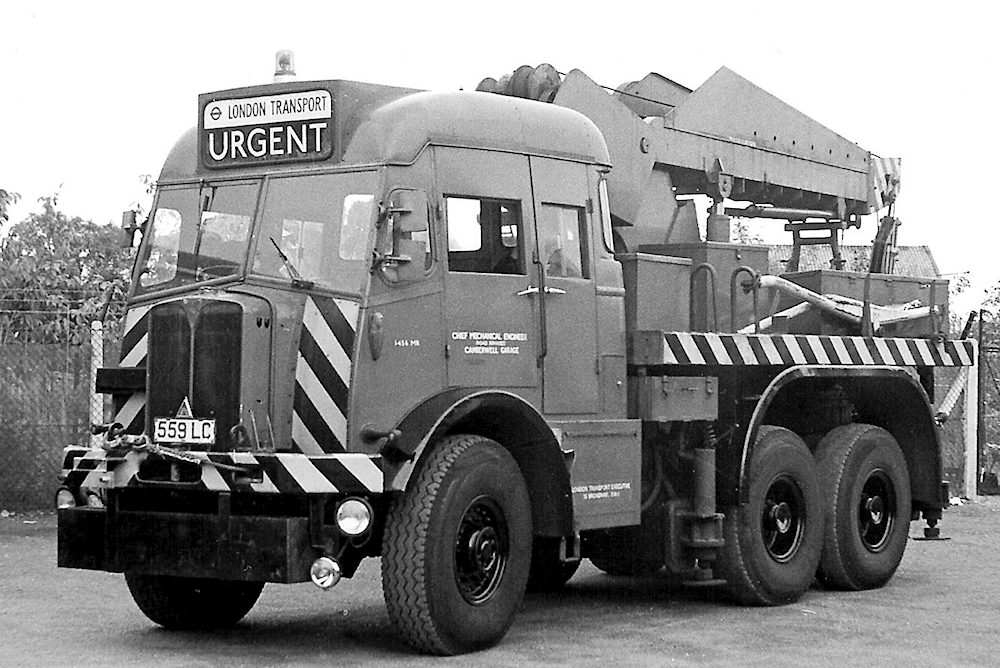 There is a lot to see in this photo You can see six storage lockers. The Crane mounted locker itself was removed a few years after it was fitted, probably because someone worked out that when you used the turntable you were moving the box and its contents as well as the load therby restricting capacity! The rear nearside one was removed by myself in 2011 when the bottom rusted away.You can also see the Block that was used to keep the front down when lifting and a couple of Tow Bars. 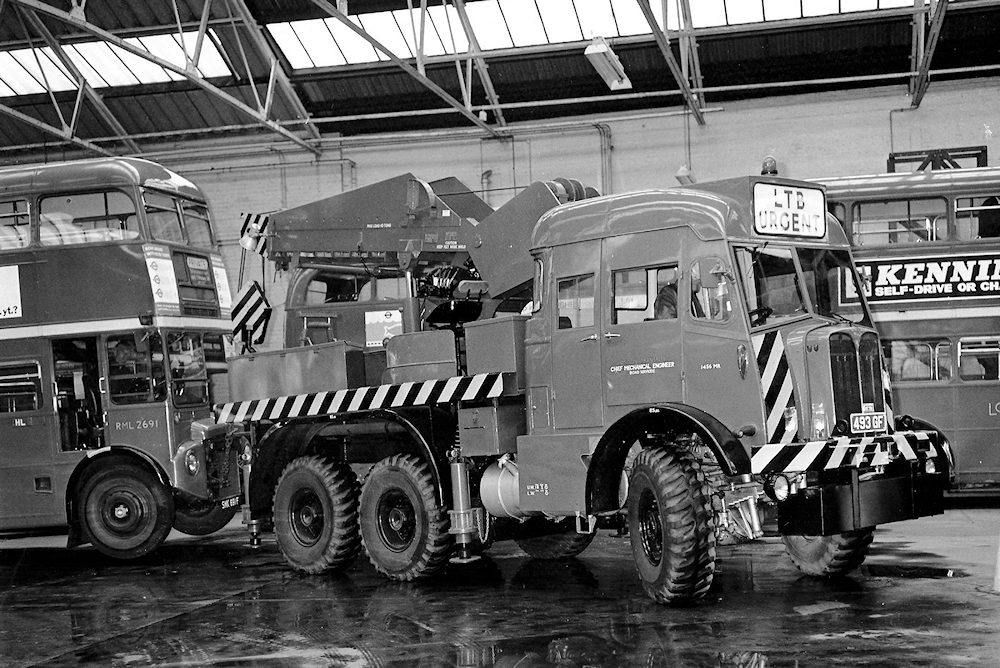 This lovely study of a bus recovery is not of Milly, but of her sister RM1457. As you can see in the next few images there were many similarities. 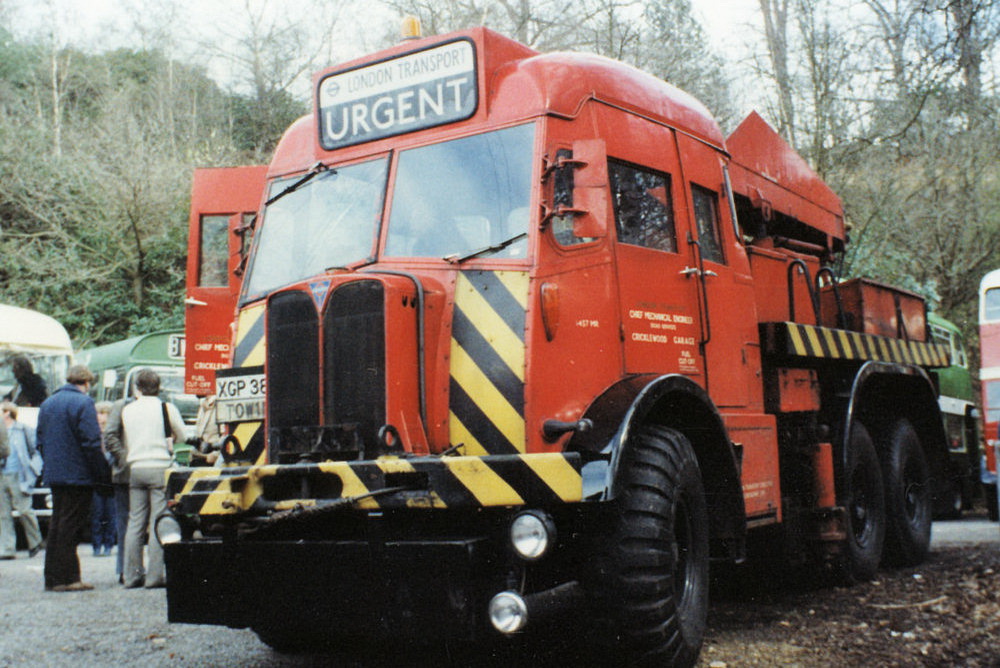 This pictures again is not of Milly, but of her sister RM1457. The pictures were taken at a Bus rally in 1983. The big question however, is why is she wearing Milly's Number Plate? Anyone who can tell us the answer, please email. Picture from K Walker via Chris Heaps 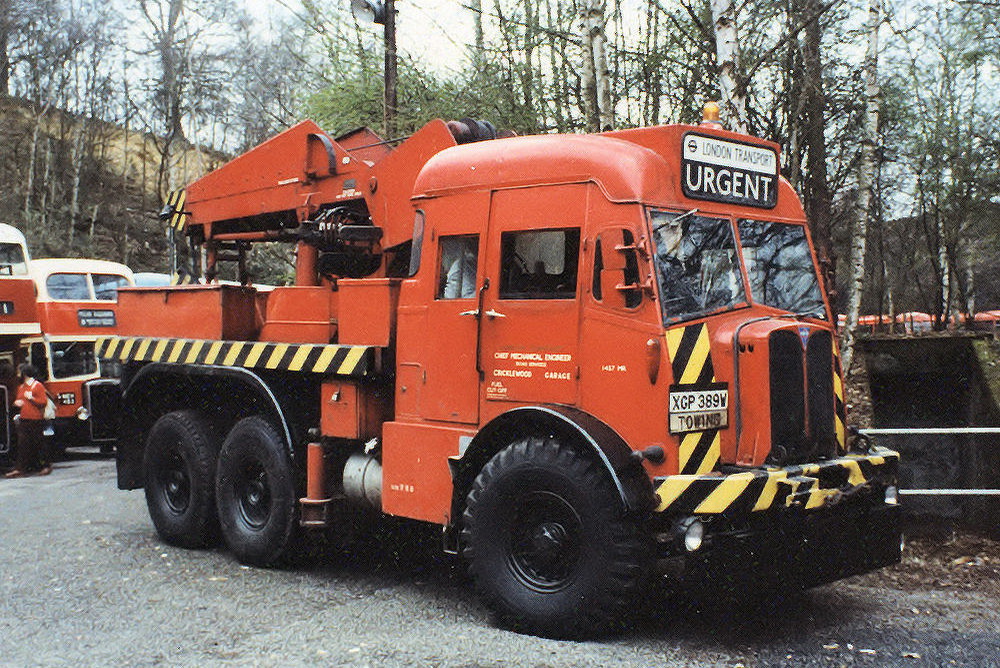 Again not Milly, but her sister RM1457. They are difficult to tell apart, but this one (RV1457) was only a 4 x 6 (just two axles are powered) unlike Milly who could have had power to all her wheels. Picture is from K Walker via Chris Heaps

A wonderful picture of 'pristine' Milly, taken in July 1983 we think at a 'Chiswick Open Day'. It had just had a major repaint, and was waiting for someone to buy it. Photo from Ken Read 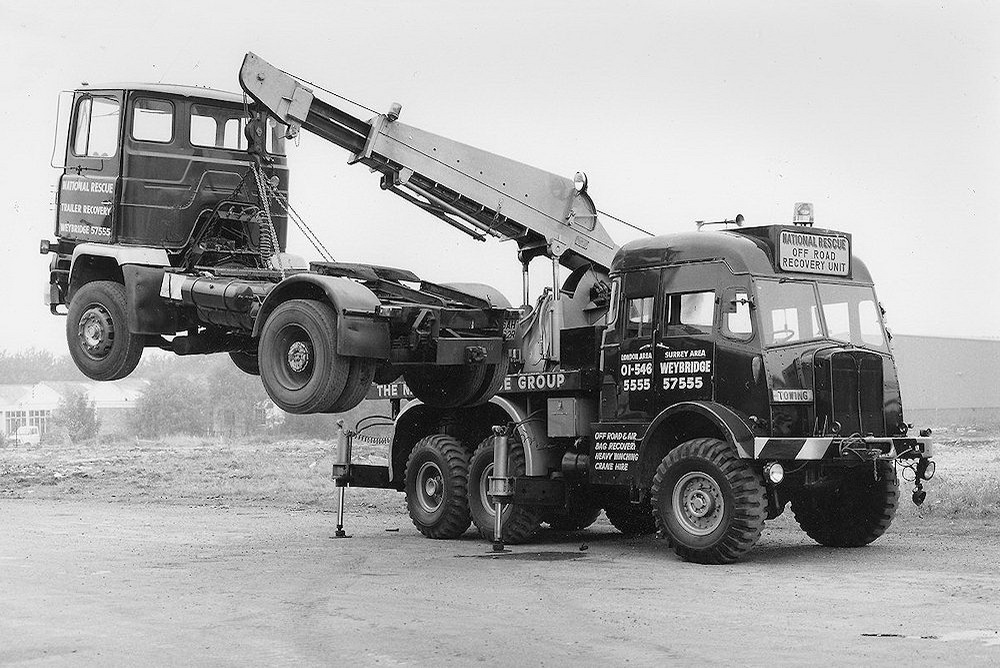 Two visiting London Transport Flying Club Piper Aircraft stop in at Brooklands and Milly went out to meet them and no doubt chat about old times. Their aircraft colour scheme is based the one used by the London General Omnibus Company in the thirties. 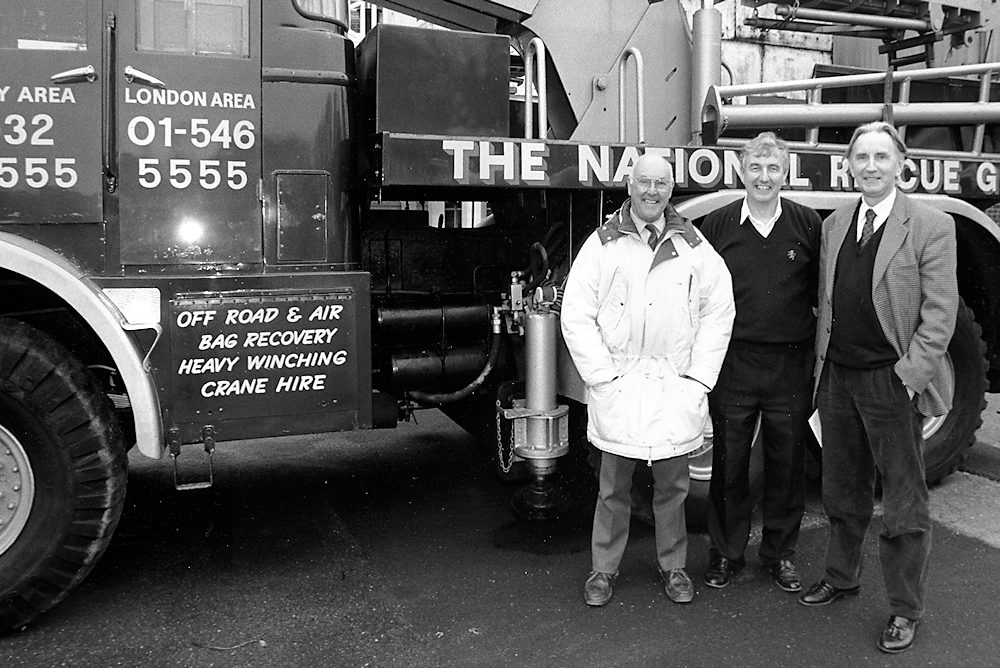 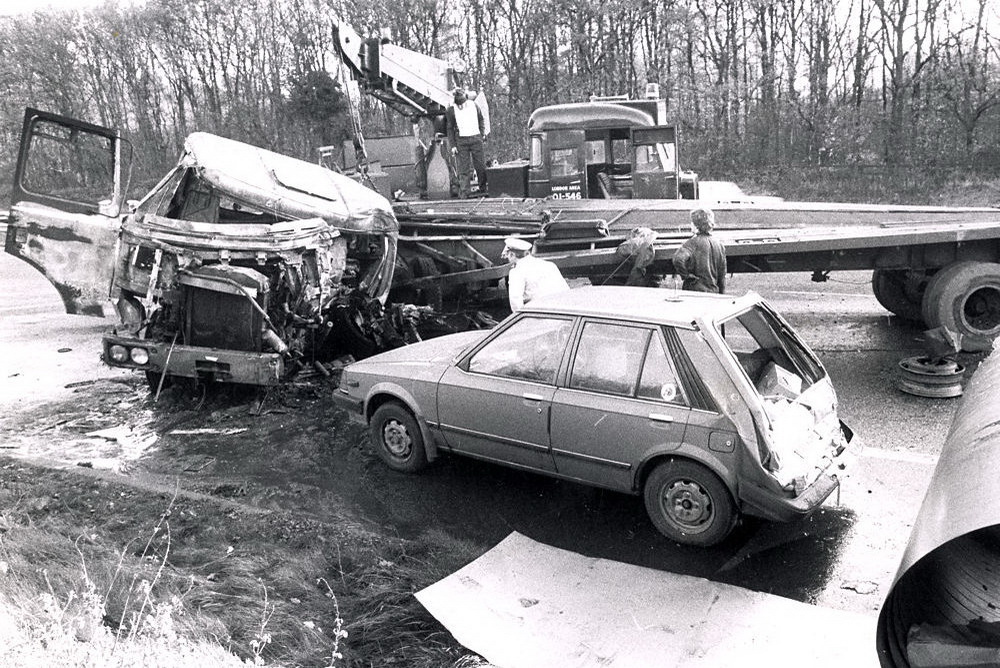 This is typical of the sort of carnage Milly had to deal with during her years with NRG this was for sure the busiest time of her long life. This particular incident took place on the A3 in late 1986, the lorry was carrying rolled up steel and when it jack-knifed the steel came off. Milly was called to clear up the mess. 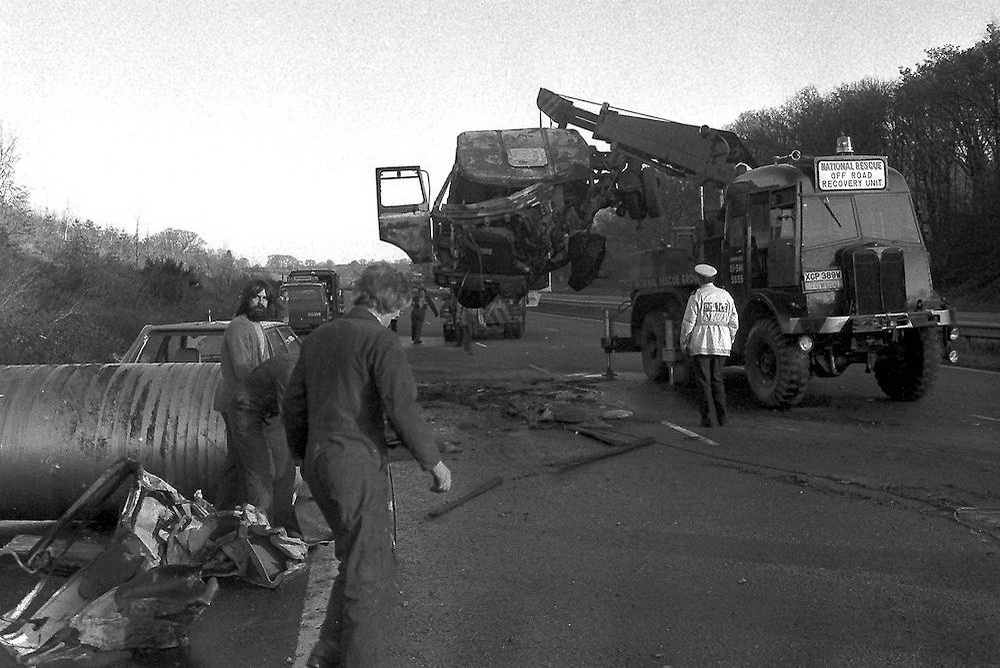 Clearing up on the A3 at Esher - First Milly lifted the damaged trailer off the tractor that had been towing it, then loaded it onto a waiting low loader. Milly then picked up the Tractor itself and loaded that as well. Lastly she cleaned up all the rolls of metal. 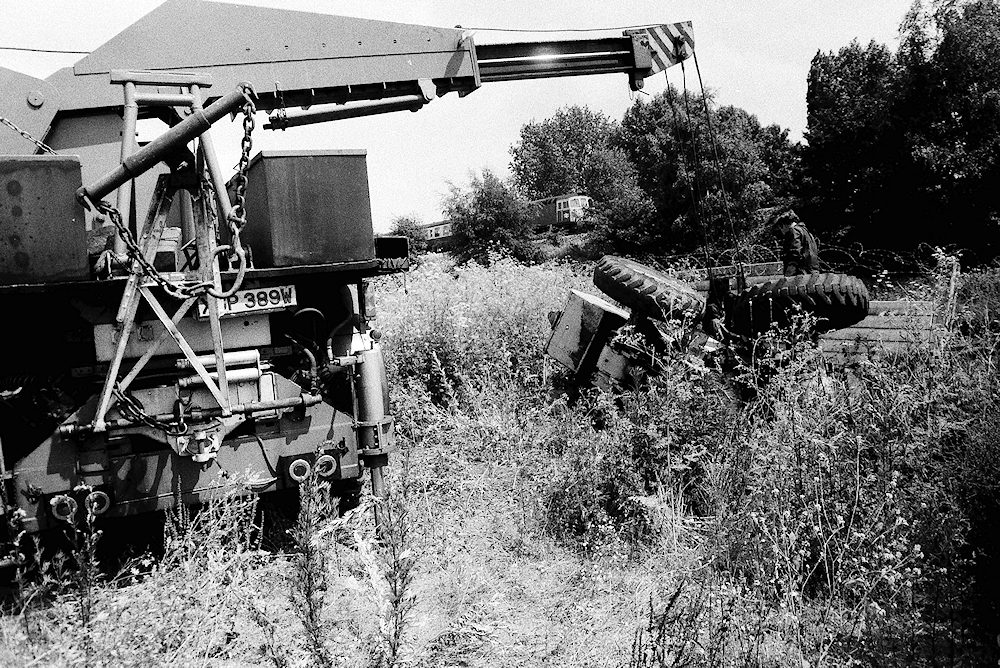 Another job just perfect for Milly’s abilities, recovering a Dumper Truck that had fallen down a Railway Embankment around 1988 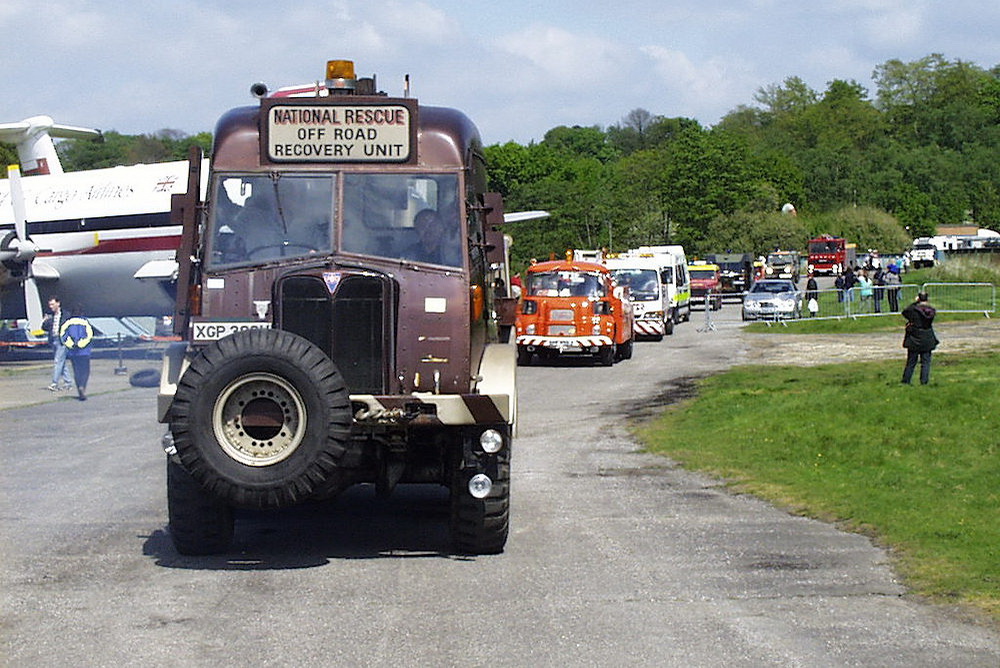 Milly's leads out a convoy of vintage and interesting emergency service vehicles onto the Brooklands Runway. This used to be an annual experience on May Day weekend (get it May Day?). The building of Mercedes World (built on the exact spot where this picture was taken), has now sadly stopped this. 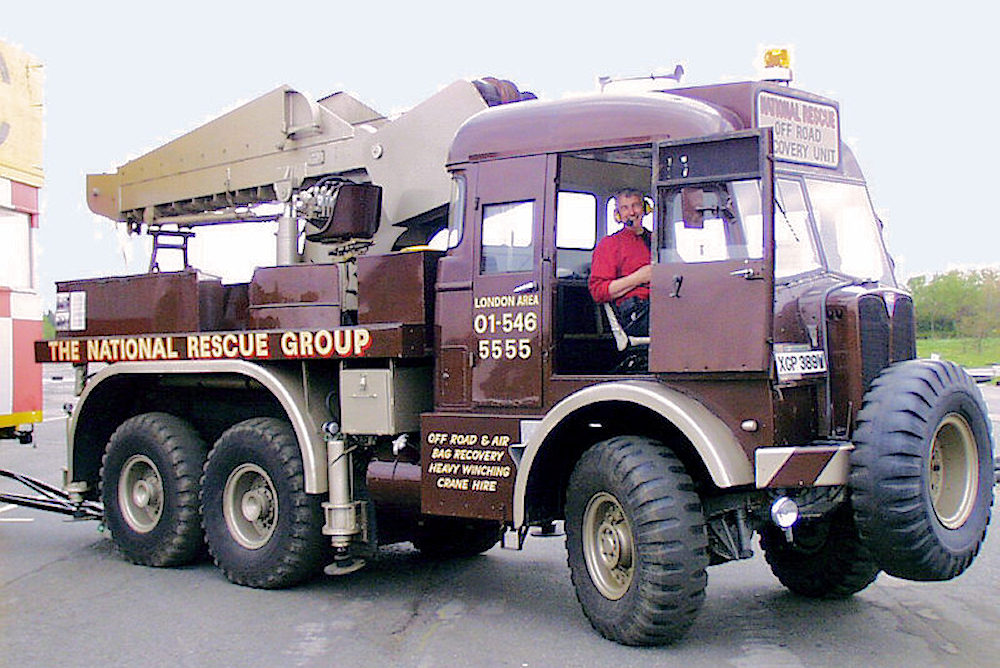 This picture shows Milly pulling the Brooklands Airfield Control Tower during one of the many Fly-ins that Milly used to attend as the resident ARV (Airfield Rescue Vehicle) before Mercedes-Benz World converted the runway to a driving track.

This was one of the first jobs NRG were asked to help Brooklands with. This Harrier arrived but needed lifting off. Milly was of course happy to help 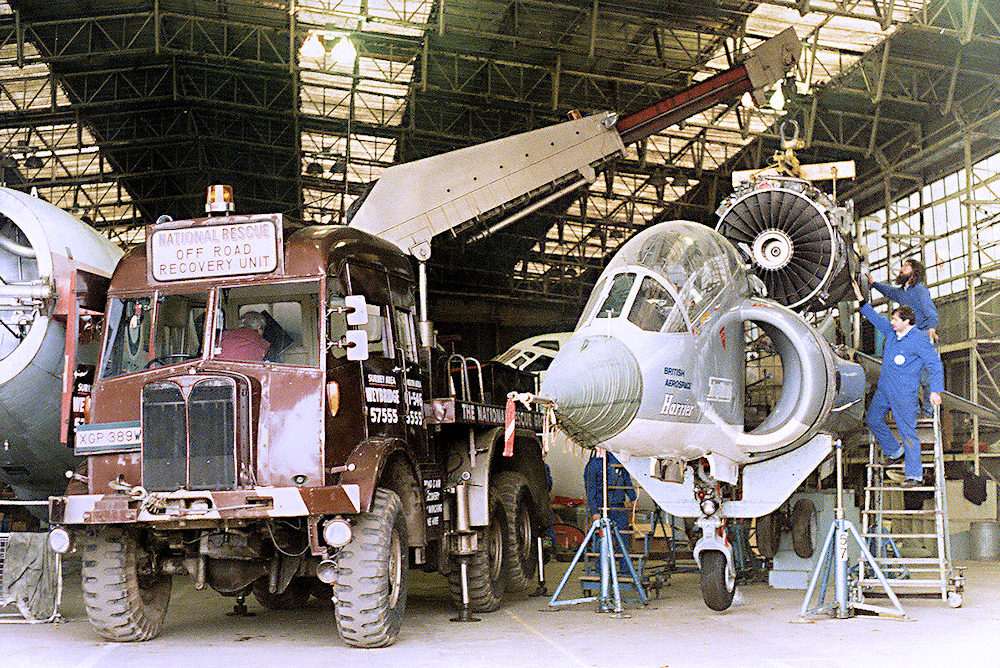 As always happens at Brooklands - "While you are here mate, any chance you could just help us put the engine in?" 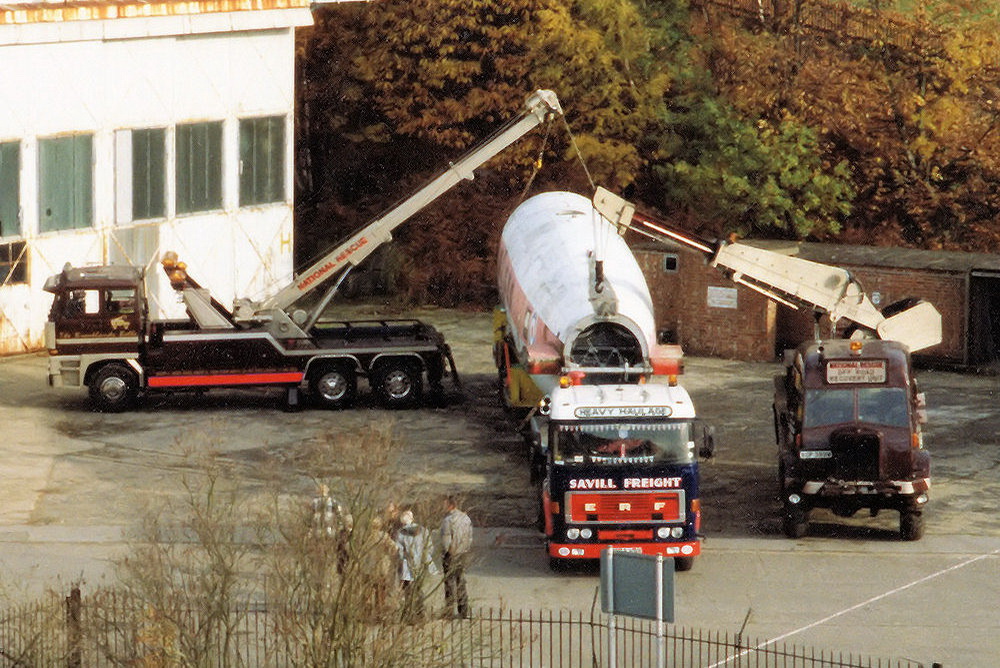 This was another early Aircraft lift, after the Brooklands Belle (Left) had gone to Cambridgeshire and loaded the Varsity Aircraft Milly helped her unload. 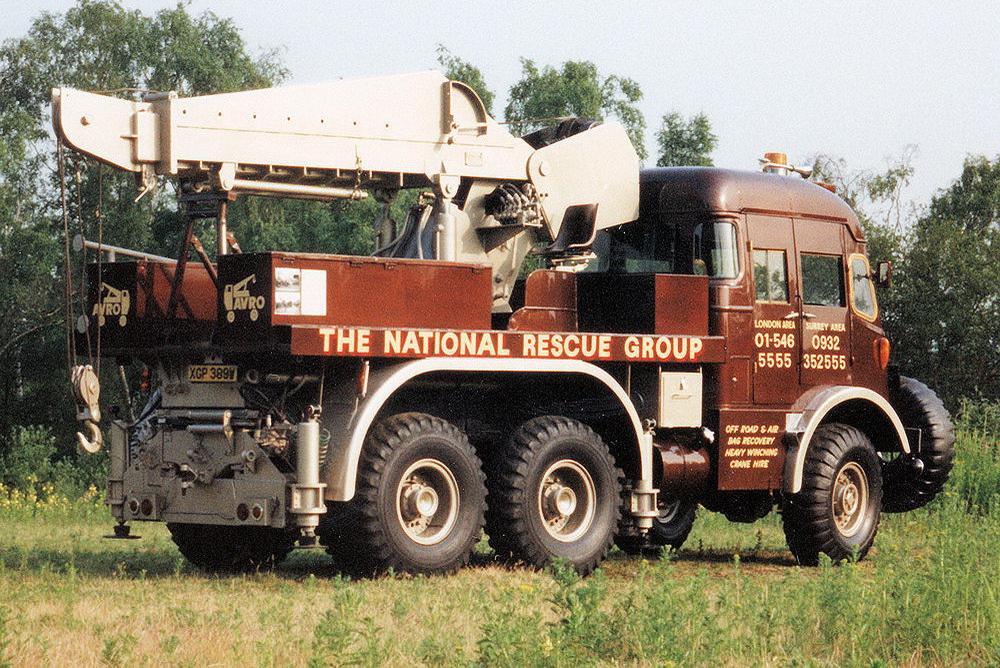 This photo was taken when Milly retired from NRG (along with her owner) and moved to live full time at the museum.